The Canon Online Competition is available to PSNZ members only. Submissions should be made via the member's area of this website.

The Overall Results for 2021 can be found here. 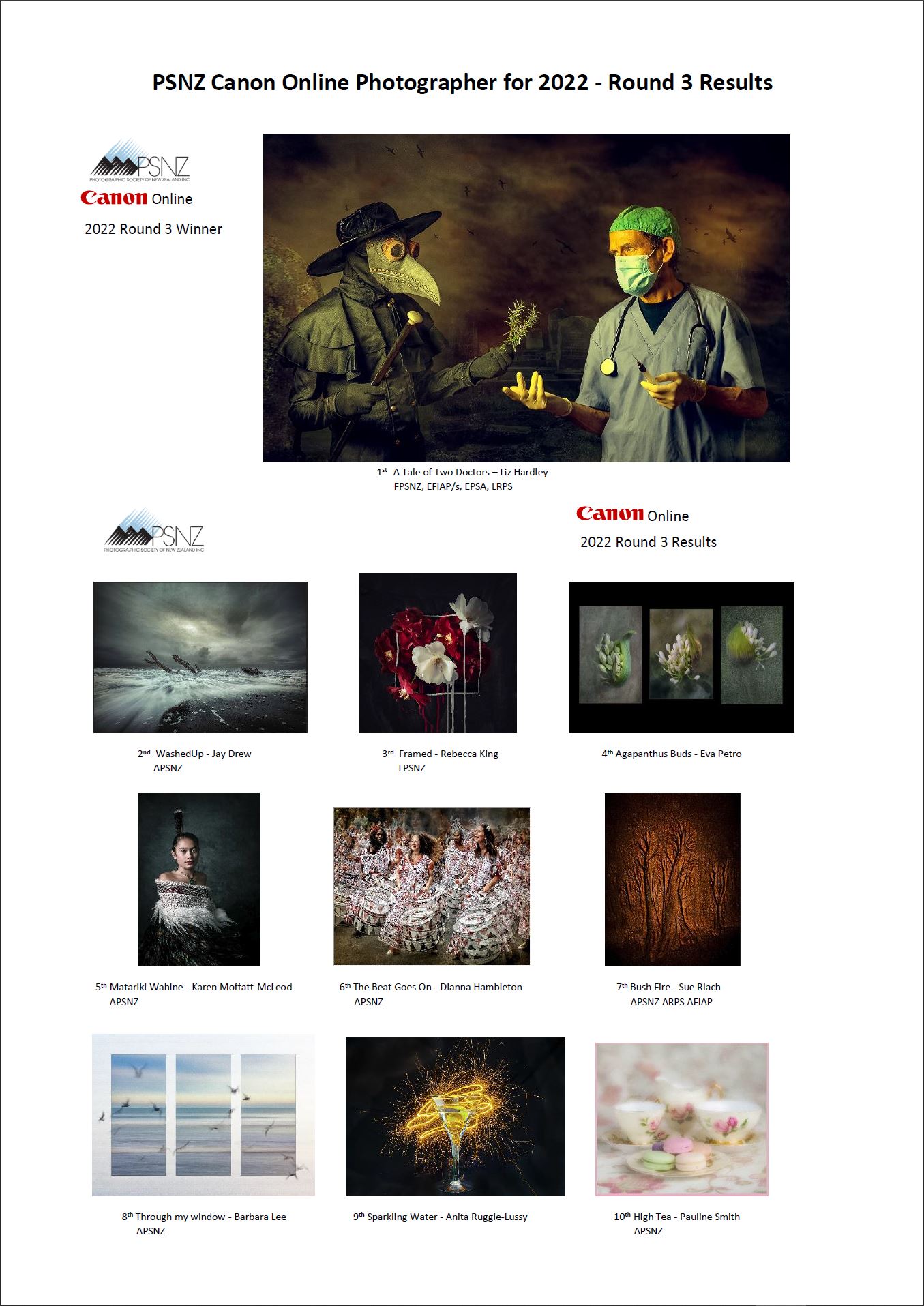 Congratulations to Liz Hardley, the winner of the Canon Online round 3 for 2022.  There were 160 entries in this round.  Liz writes about her winning image:

I have been entering the Canon Online competition for many years, and although I have placed several times, I have never previously won a round, so I am delighted to have finally achieved what has been a long-time goal of mine.

My image was created specifically for the Auckland Photographic Society’s February monthly challenge: Old and New - juxtapose the old and the new to create a comparison or a contrast­­­­. I enjoy compositing (usually surreal) images to create stories, and I came up with the idea of depicting an imaginary meeting between a medieval plague doctor and a modern doctor. The two doctors have similarities e.g. they wear gloves and masks, but they are also obviously different e.g. to treat their patients the plague doctor uses medicinal herbs and the modern doctor uses vaccines. I initially made a rough sketch, using pencil and paper, to work out the image composition, which would be very simple, dominated by the two doctors, with an atmospheric, somewhat gothic background. I already had images of dark skies, birds and graves in my back catalogue, which I could utilize for the background, so it was then “just” a case of shooting the two protagonists. My long-suffering partner/model Glynn obliged by dressing up as both the doctors for me and then posing in the positions from my original sketch. The herb was a sprig of rosemary sourced from the garden. Once I had all the required images it became a matter of post-processing in Photoshop, compositing the images using layers and blending modes and colour grading until I achieved the effect I wanted (which as usual took much longer than intended!).

I first became a “serious” photographer in the eighties in the UK when I bought a Minolta x500, and loved working in the old darkroom days. However, when I came to NZ in 1995 photography took a back burner until 2006, when I joined the Auckland Photographic Society (APS) with a newly acquired digital Nikon D70s.  Sixteen years later I am an enthusiastic APS Committee member and now primarily use a mirrorless Nikon Z7ii for taking images. Photography for me has always been and continues to be an enjoyable hobby, having never been interested in pursuing it commercially. While I enjoy making composites like “A Tale of Two Doctors”, I also gain a lot of pleasure tackling most genres, and as I am motivated by competitions I can readily be found taking pictures of insects one week and architecture the next, a real jack of all trades. Since gaining my FPSNZ in 2010 my focus has switched to gaining international distinctions within FIAP and more recently within PSA. I am also a passionate advocate for printmaking, and sincerely hope that prints will survive the digital age.

Elizabeth is a life member and past president of the Greymouth Photography Club and has been a member of PSNZ since 1987. A keen entrant in the regional and national photography exhibitions since joining PSNZ, she began entering the internationals in 1996 and has won numerous awards at all levels.

Elizabeth has been a PSNZ accredited judge since 1995 and, since 2020, has been judging in the international exhibitions. In January 2019 she began volunteering as a Star Ratings Coordinator and Star Ratings Director with the Photographic Society of America, enjoying the contact that brings with photographers from around the globe.

As with other judges who have been asked to select the top 10 images in this competition, I found choosing the final 10 came with making some hard choices. When I first received the images I narrowed it down to the top 15 based on first impressions. After a few days break I repeated the selection process to see if those first impressions had changed at all; there were a couple of minor tweaks to the selection, but mostly my initial selection did not alter much at all. Then came the difficult task of refining that selection to just 10 images. It was a close call as each one had many good points making it worthy of consideration. I looked for visual and/or emotional impact, strength in the story-telling and whether or not the technical aspects of creating the image were well handled.

This photograph has been well thought out and very well executed. Every element of this image adds to the story, while the lighting on the two doctors set against the muted background gives an instant visual impact. I love the contrast of the doctors from two different eras... and the beak the plague doctor is wearing definitely draws the eye! Without a doubt, this was the winner of this round and I congratulate the author on their excellent work.

I was immediately drawn to the moodiness and drama of this photograph. The low viewpoint accentuates the lead-in lines of the surf which draw you into the image, while the washed up tree nicely connects the sea and sky by breaking through the horizon line. The dramatic sky and sombre tones in the image give a sense of foreboding. There is much to enjoy in viewing this excellent photograph.

I was instantly taken by both the simplicity and the idea behind this image. The framing effect is really well done and brings creativity and uniqueness to the work. The simple colour palette is striking and the use of a black background allows the subject to stand out. I loved everything about this image.

This subject is well-suited to its presentation as a triptych. The muted tones complement the overall work, giving a delicate and artistic feel. I felt this entry was very deserving of a place in the top ten.

The lighting in this image is beautiful, enhancing details and bringing depth to image. The muted tones in the background allow the model to stand out and are complementary to the overall image.

6th The Beat Goes On By Dianna Hambleton APSNZ

I love the creativity used in this photograph to emphasise the movement, action and rhythm. The expressions on the faces, together with the red, white and black colour palette complemented by warm tones, make this image vibrant and full of life. It brings a sense of fun and joy.

The use of just two tones, especially the warm tone, give this image instant impact. The title conveys the author's interpretation to the viewer... and it certainly works well, being imaginative and creative. The differing sizes of the 'trees' give a sense of depth. I enjoyed this image very much.

8th Through my window By Barbara Lee APSNZ

I was instantly drawn to the use of the birds overlaying the triptych, thus linking the three images together and allowing the viewer to follow the path of the birds from left to right. The gentle movement in both the birds and the sea, along with the pastel colour palette, brings sense of calm.

This image is vibrant, creative and dynamic. The sparkling effect behind the glass brings the image to life, both by the use of colour and creativity. It has instant impact to the viewer and I was instantly drawn to it. Keep up with the great ideas.

The soft tones and pastel colours in this work bring a sense of both femininity and delicacy, and the softness of the diffused effect complement this. I find the composition keeps the viewer's eye contained within the image and on the centre of interest.