Jack’s interest in camera clubs started in the 1950’s and continued through every year of his life. He was a photographer who successfully embraced black and white, colour, slides, audio visuals, digital and digital audio visuals. He was always willing to help others.

Jack was a key member of the Photographic Society of New Zealand – he served on Council; was President in 1996-97 and was a member of the Honours board. So important was his contribution to PSNZ that Jack was awarded an Honorary Fellowship in 2001 (PSNZ’s highest honour).

The Sprosen family have donated a trophy in memory of Jack which is the purpose of this competition. 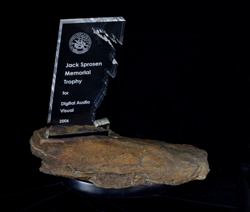