Congratulations on taking up the challenge of taking part in International Exhibitions (also called Salons).  It can be very rewarding and fun. The starting point for FIAP distinctions is 'AFIAP':

The distinction “Artist FIAP” (AFIAP) is the first artistic distinction that can be obtained. It is awarded to photographers whose artistic qualities, technique and production of work have been acknowledged through their participation in international salons under FIAP Patronage.

The candidate for this distinction must:

In addition to the FIAP requirements, PSNZ requires that an AFIAP candidate needs to have at least five ‘PSNZ National Exhibition’ acceptances and be a PSNZ financial member to qualify for the PSNZ recommendation.

To be awarded your FIAP dsitinction, you will also need a FIAP 'Photographers life card', details on how to apply for this can be found here

You can find International salons to enter at this link http://patronages.fiap.net/salons.html

You will need to keep detailed records of your acceptances on order to complete the FIAP Dossier application form required later when you make your submission for AFIAP.

The data needed for recording your Acceptances is:-

I suggest you use EXCEL to record your data and if you format it in the following manor your file will match the final FIAP dossier format.

set “no properties” for backgrounds

Here is an example of the layout of the final FIAP dossier: 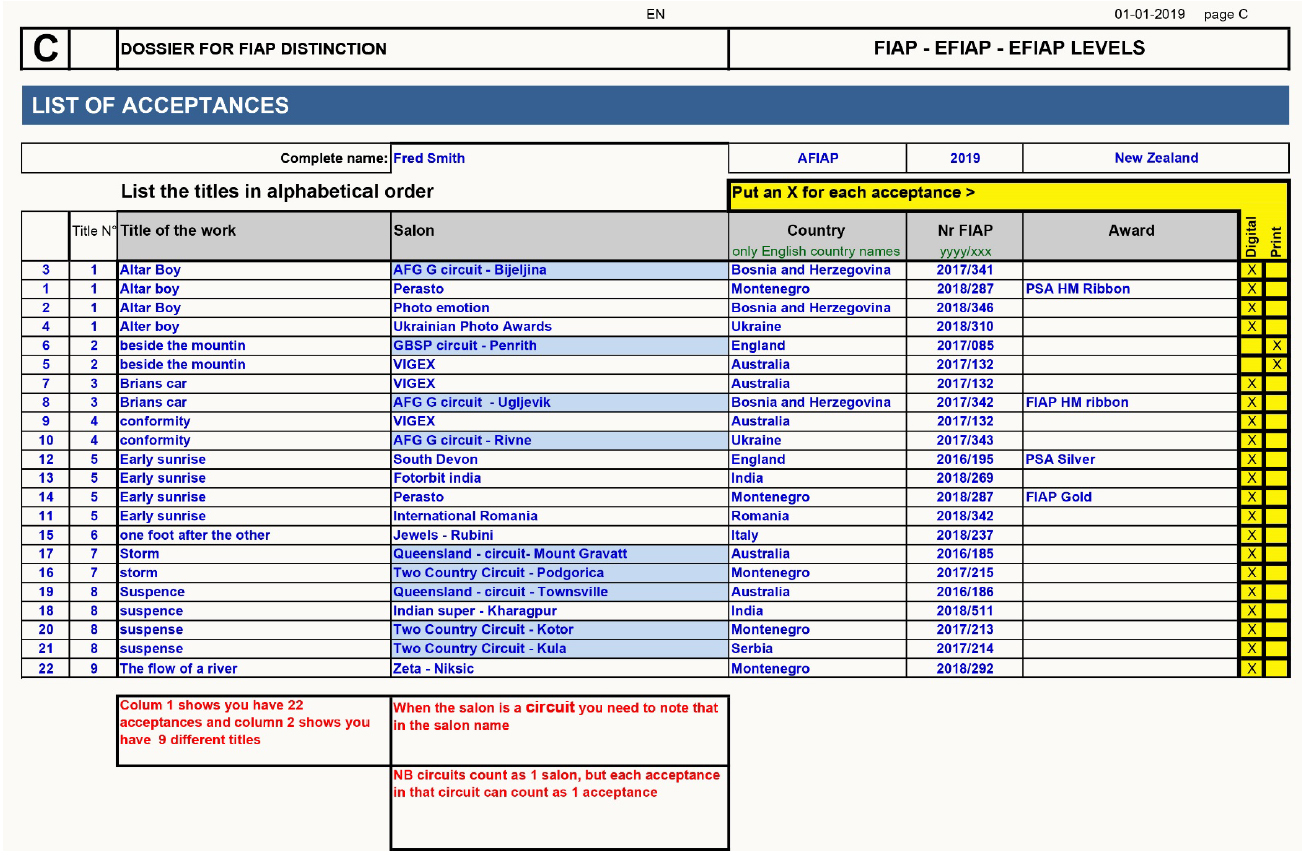 NB. Please look at the circuit explanation/example further down the page.

This relates to each new title. Titles with the same name will have the same number.

The title must be that which appears in the catalogue. The title should be the same for ALL acceptances for that image. The practice of using the same title for different images, differentiated by a number is to be strongly discouraged. This is because some exhibitions do not include such numbers in their catalogues; consequently, such acceptances may not be verifiable.

Many exhibitions place limits on the length of titles. This can vary from 25 to 35 characters including spaces. With ‘on-line’ entry systems that refuse a title if it does not comply, you need to bear this in mind as well. Unlike our “Natural History” naming requirements the International salon’s “Nature” section does not require Latin sub-titles, apart from the fact that they are hard to fit on the 35-character limit, they are rarely if ever read out to the selectors and even more rarely are they included in catalogues.

It is totally unnecessary to include full details of longwinded salon names. That information is not needed. In the case of a stand-alone Exhibition, for example, “The 32nd Northern Counties International Salon of Photography 2011” – all of this information is not needed.  All that is needed in the Salon column is Northern Counties. In the case of a Circuit, they do need more information because they also need to know which salon of the Circuit is involved, but again, it should be very basic. For example the “Linz” Exhibition in the “Trierenberg Super Circuit” should be shown as Trierenberg circuit–Linz. A second example may be the “Carlisle” Exhibition of the “Great British Small Prints Circuit”. This can be shown simply as GB S/Prints circuit – Carlisle

In dealing with this please remember that England, Scotland and Wales are separate countries and should be shown as such.

You can confirm which country a salon is recognise with by checking out the FIAP patronage site at http://patronages.fiap.net/salons.html

The “FIAP No.” Column

Remember that your recording of the FIAP number must be accurate.  FIAP will check your acceptance record against their central Database of Salon Results.

You should also be aware of the difference between a Salon and a Circuit. A Salon is a single event, which is likely have different sections (eg: Open, Nature, Photo-Travel etc) into which you can enter different images and these will be judged just the once.

A Circuit will be comprised of more than one Salon, each having identical sections, so that the photographs you submit will be passed from one salon to another and can then gain acceptances and awards in each salon. Sometimes the different salons are registered to different countries as well. It is possible to have multiple acceptances for an image in a circuit, and there might be more than one country involved, they all count. But a circuit can only count as “one salon” and "one country".

The results of this circuit are: six acceptances, one country, one salon.

Recommendations for FIAP recognitions are processed through the FIAP Liaison Officer for each country and can only be applied for all together once a year.

It has been our practise to start asking for drafts at the end of June so we can have a quick check that you are on the right track. At this time you will be asked go online and register for a “Photographers card” and then later on, closer to the end of October, we will get the other forms sorted out. The final sets of completed dossiers will be sent to FIAP at the end of October.

Obviously you have to achieve the relevant criteria BEFORE you register for a FIAP Distinction. NO title, acceptance or award will count towards any application for a distinction until the salon involved has submitted their Salon Report, which contains all the results, to FIAP. Salons are required to submit these files within a specified length of time, but many are late by quite a few months. It is therefore pointless relying on Report Cards, Email or Website notifications. You can check whether FIAP has received the Salon Report by visiting

In the “Listings by Months” you will find that there is a box for each event that will indicate ‘Yes’ or ‘No’ in this respect. Unless ‘Yes’ is in this column DO NOT INCLUDE that salon’s results in your application/